Hello hello! It's certainly been awhile but I'm going to get to the point:

This was truly by coincidence that this happened, but I'm so glad to be writing this as a part of Asian/Pacific American Heritage Month.

I'm here to talk about my most recent work of cover art (below) for my dear friend and fellow Bonbu Stories member Miharu Okamura's release of a "regeneration" of Ei Ja Nai Ka, the Japanese American taiko folk dance and Obon staple originally written by Yoko Fujimoto (Japanese lyrics/melody) and PJ Hirabayashi, founder of TaikoPeace and Artistic Director Emeritus of San Jose Taiko (percussion/chant/dance). That was a mouthful.

The main themes behind Ei Ja Nai Ka as well as my artwork are celebration of and gratitude for the generations that came before us, whether within familial lines or in our communities.

The original Bon Odori movements for EJNK are an homage to the Issei, or first generation, "that reflect [their] work in agriculture, mining, and railroad construction." In a similar vein, Miharu's lyrics convey deep gratitude for our predecessors and the opportunities they've given us, as well as a drive to continue creating to add on to their legacies and create our own.

Listen to Miharu's cover below:

My intention with my artwork was to draw from my own personal experiences of Obon and Bon Odori-- I didn't grow up Buddhist and only started attending Obon festivals after I started college, but they're some of my fondest memories and among the events I most look forward to every year. As some festivals have already been cancelled out of an abundance of caution with all the others still up in the air, I wanted to try to capture the sense of joy, comfort, and togetherness that I am personally needing right now during this quarantine.

Grid comparison of my illustrations and source images of the cover for the Yellow Pearl album and poster for the artbook.

I also wanted to convey the same sense of momentum stemming from gratitude that Miharu captures so well with her song. I was very much inspired by the lives and work of the artists and activists of the Asian American Movement of the 60s and 70s, stylistically drawing from the folk music group Yellow Pearl and New York Chinatown's art collective, Basement Workshop. 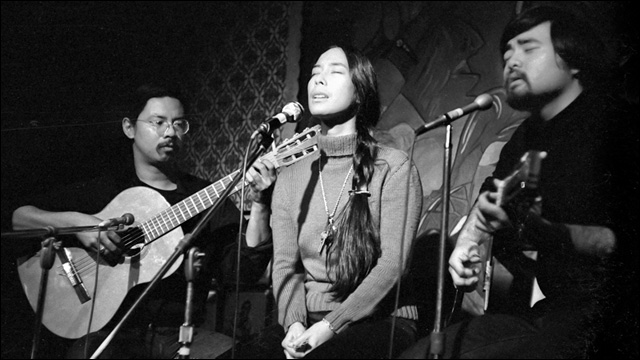 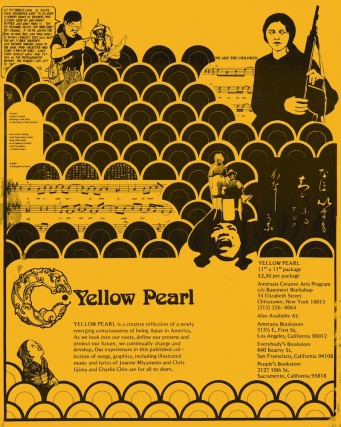 Coming of age during the civil rights and anti-war movements, the children and grandchildren of Asian immigrants unleashed a whirlwind of grassroots activism beginning in the late 1960s. Around the country, they protested the war. They demanded ethnic studies curricula. They organized against urban renewal projects that displaced the residents of old Chinatowns and Japantowns. They formed literary workshops, art collectives, and social service centers. A Grain of Sand was a direct extension of Chris, Nobuko, and Charlie’s collaboration in the Asian American Movement.

One important community that provided support and inspiration for A Grain of Sand was Basement Workshop, an Asian American collective in New York’s Chinatown. Formed in 1970, they ran a creative arts program, a resource center for community documentation, and a youth employment program; produced a magazine; and offered language and citizenship classes. In 1971, Basement Workshop undertook a project to illustrate and publish the music of Chris, Nobuko, and Charlie. Titled Yellow Pearl, after one of their songs, it grew into a larger compilation of writing, art, and music. Public artist Tomie Arai emphasizes the importance of Basement and A Grain of Sand during this period: “You have to understand. There wasn’t anything at all out there. There was no music. No published poetry, music, recordings. Nothing. It was through Basement that people began to refer to themselves as artists. I didn’t know any artists. I wanted to be one—but I didn’t know what that meant.”

Listen to We Are The Children:

"No history, no self. Know history, know self."

The first Asian American Studies (abbreviated AAS here for convenience) class I took was by mistake.

I was an incoming freshperson at UCLA summer orientation planning my first quarter classes and chose an AAS literature class for a GE requirement. When it came time to actually enroll, though, I misspoke and told my New Student Advisor the wrong class-- Asian American Movement-- and was too shy and too slow to correct him before my fate was sealed. I'm also 99% positive there was no class description at the time of enrollment, as I had no idea what to expect of the class (but was expecting the worst, anyway).

I don't think I've talked to my NSA at all since orientation, but I can't thank him enough because this class changed my life.

Among everything it introduced me to-- the rich and diverse history of Asian America beyond WWII and involvement in railroad construction and mining; the cultural and sociopolitical identity that is "Asian American" that I never knew existed beyond azn youtubers and JA basketball-- it most importantly introduced me to the artists and activists like Yellow Pearl and Basement Workshop who were so integral in the movement and ultimately made Asian American art possible.

That fall saw the confluence of so many things that have made me who I am today: my first AAS class which birthed within me a new consciousness of being Asian American; joining UCLA Kyodo Taiko and falling in love with the people and the art form; and becoming a part of the Nikkei Student Union where I was surrounded, for the first time, by other Japanese Americans my age who were not blood relatives, all formed the basis of my current values and allowed me to envision a life I didn't know was possible, let alone something I wanted.

The quote, "No history, no self. Know history, know self," attributed to Filipino nationalist Jose Rizal, is one that I try not to throw around lightly due to its evident truth and profundity in my own life as an individual and as a part of a community. As I did my research for this project, both refreshing my memory and learning new things, I was reminded just how much Asian American Studies and the knowledge of the cultural and sociopolitical history of Asian America have impacted my personal life and work as an artist, even if it may not be readily apparent. A small tribute is the very least I can do to show my gratitude for the people who have made it so that I can be the sum of all my collective identities-- an Asian American Studies major, an artist, a poet, a taiko player, a Yonsei, an Asian American.

There is a great amount of literature and resources on the history of the Asian American movement, all of which are far more eloquent and informative than I could try to be in this short blog post. I've included links to some of my resources for this project at the bottom of this post for highly encouraged further reading/viewing.

I cannot say it enough, but I am so honored and thankful that Miharu gave me this wonderful opportunity of artistic challenge and valuable introspection.

Also, have you watched PBS's Asian Americans yet? It's a 5-hour special docuseries focusing on Asian American history, and it's completely free to stream until June 8. Episode 4, Generation Rising, covers the exact activism of the 60s and 70s and birth of the term "Asian American" that this blog post is about. Link included below.

Excellent article by Sojin Kim detailing the background and legacy of Yellow Pearl and its members; be sure to check out the extra music, video, and visual content, including portions of Basement Workshop's art book Yellow Pearl

Documentary on the life and legacy of Yellow Pearl member and lifelong activist, Chris Iijima. I myself need to rewatch as a refresher, but has a slightly more focused range in content. We watched this in my first AAS class early on in the quarter and I cried. Typical

History of Basement Workshop and the surrounding movement in New York, examining its roots and its legacy. Please also go through his website, which

Insight into the history and timeline of the original Ei Ja Nai Ka, with some words from PJ Hirabayashi.

A brief but thorough summary of the Asian American Movement, including influences, key ideas, and legacy

A five-hour docuseries on Asian American history, the first of its kind in its scope and focus. Can you believe we're just getting this now, in 20freaking20? Episode 4,

Generation Rising, covers the 60s and 70s and gives perfect context to this EJNK project. FREE TO STREAM UNTIL JUNE 8.